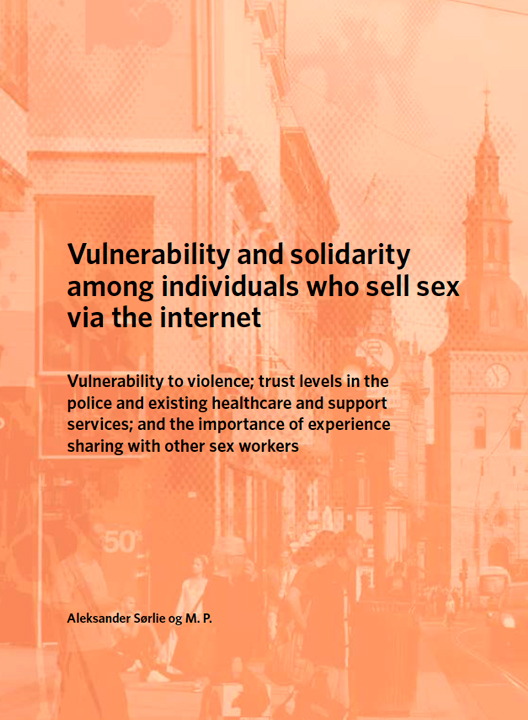 Vulnerability and solidarity among individuals who sell sex via the internet

The report «Vulnerability and solidarity among individuals who sell sex via the internet», is a survey of the experiences of people selling sex in Norway via the internet.

The report is based on a survey of 50 respondents conducted between November 2018 and January 2019.

The result support findings from previous surveys that show that people who sell sex in Norway are a vulnerable group in terms of violence, harassment and sexual abuse, and confirms that this also applies to those who primarily sell sex using the internet. In total, 72% of the respondents stated that they had been exposed to violence, threats or sexual abuse from a customer during the last three years. 30% stated that they had been subjected to physical violence, threats or robbery by others than their customers because they sold sex.

The majority of the respondents stated low trust in the police, and several had refrained from making contact following a violent or illegal incident. A new finding in our survey is that trust in the police is significantly lower among Norwegian-speaking respondents, even though it was low among all groups.

Confidence in public health services was somewhat higher than in the police, but was still considered relatively low. A worrying finding was that a significant proportion of the respondents stated that they had experienced stigmatizing attitudes from health professionals. At the same time, our survey shows that many sex workers have great confidence in employees in health services who specifically work with people who sell sex, and this applies to both the Norwegian-speaking and the foreign-speaking respondents.

The sex workers in this survey stated that contact with others who sell sex was important, partly because it contributes to increased security and provides social support.

The survey was conducted by PION and funded by the Norwegian Directorate of Health.