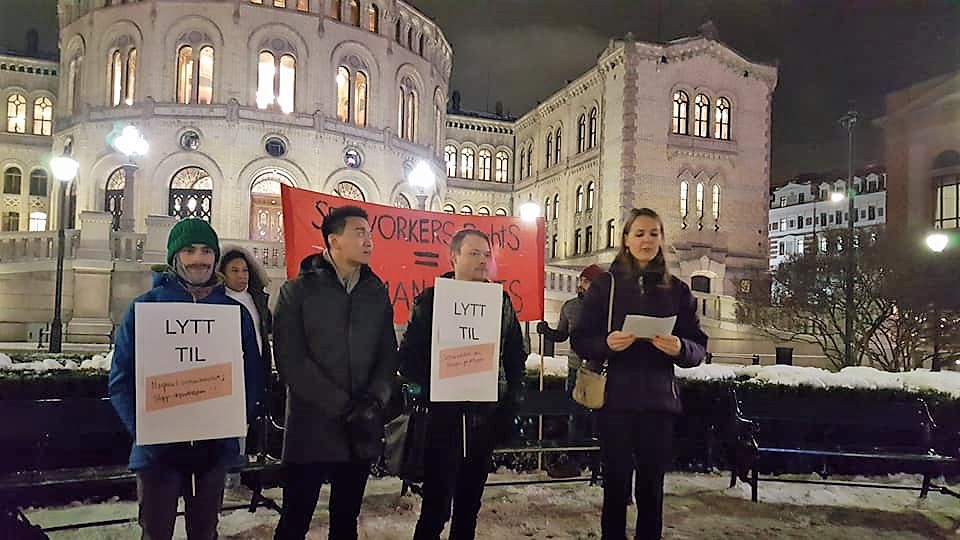 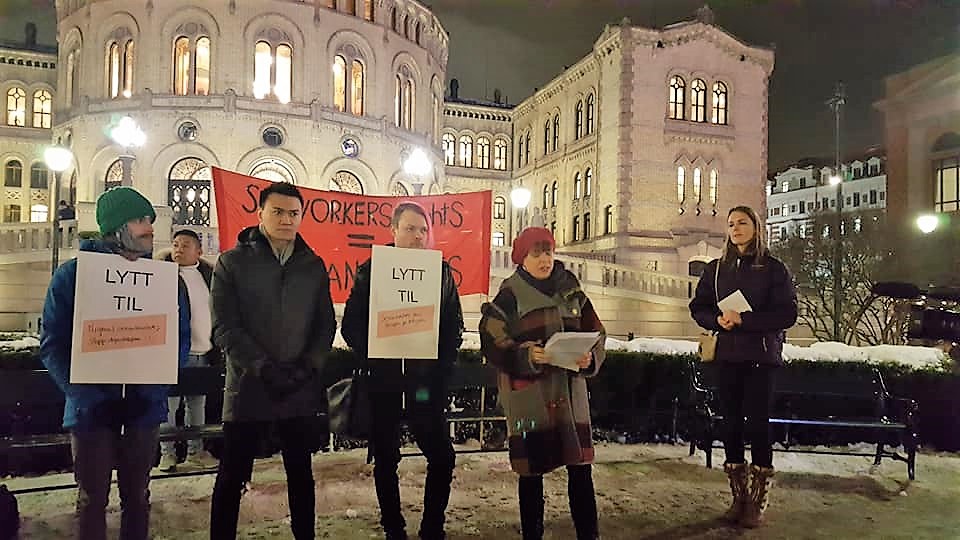 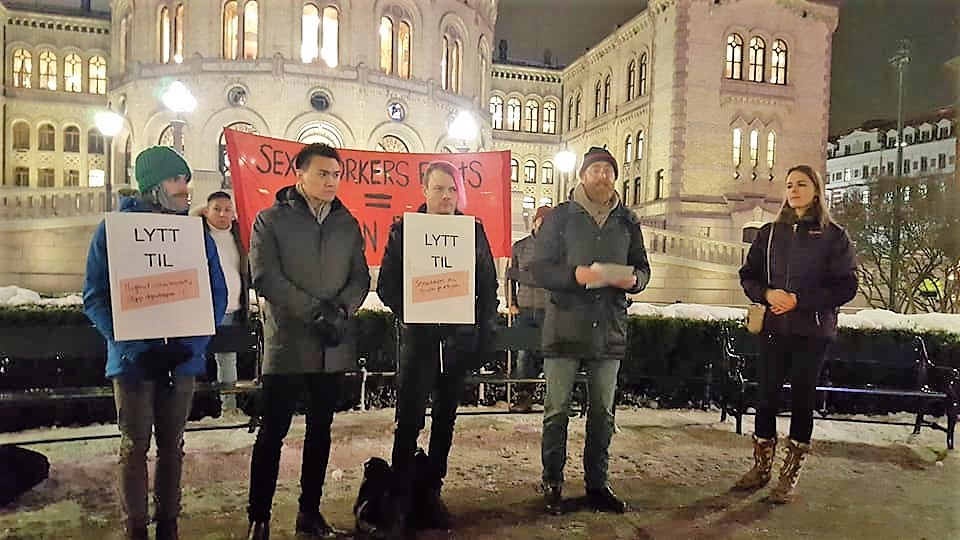 Dear friends and allies, thank you so much for coming here today, and thank you for all your support for sex workers on this really really important day.

Today, the 17th of December, is the international day to end violence against sex workers, this is the 15th year sex worker organizations all over the world come together to remember the victims of hate crime since our first gathering as a response to the Green River Killer and system allowed him to target us and get away with it for so long.

It is the day we remind each other that we who sell sex are often exposed to people that for different reasons wish to harm us, both physically, mentally and economically. We especially remember the greatest victims of this violence, the ones who lost their lives.

In Norway, we have lost five of our family that we know of since 1981, Trine Jensen, Gry Storvik (1985), Anita Hjertvik (1995) , Rebekka Rist (2006), and Galina Sandeva (2015), we feel the loss of their lives and every other sex worker around the world that have lost their lives to hate, and from neglect by among other the police.

We remember Galina Sandeva, who was killed by someone who was convinced that he had to kill someone and chose to target a vulnerable human that in his mind was not likely to be missed. Galina worked where the police would not find her, to protect the 99% of her clients that would not hurt anyone.

We remember Eva-Marée Kullander Smith, who began selling sex to support her children and find a way out of her relationship with her violent and abusive ex-boyfriend.

We remember how she lost custody of her children, because Swedish child protective services thought her children was left in better care with her violent and abusive ex-boyfriend than with a sex worker.

We remember how her entire family was denied seeing her children, and how she was brutally murdered by her ex-boyfriend, while the children were in the room right next to her, when she was finally allowed to see them again.

And we remember how the same people that took her children away, did not allow her parents to pay for her funeral, opting instead to pay for it themselves, using the money her children had inherited from their murdered mother.

We remember Vanessa Campos, a transgender sex worker who was brutally murdered while protecting a client from a gang that regularly targeted clients of sex workers. Vanessa worked in an unsafe place, away from police to protect her clients, while working to help her family in her home country.

We remember all the other 368 transgender people who have been reported dead the last year, 62% of which were sex workers, human beings exposed to hate and discrimination from several angles, often relying on sexwork as their only way of income, and knowingly risking even more stigma and hate, because the alternative was even worse.

We remember all of us that have been exposed to mental abuse, and driven to breakdowns and even suicide, by members of the public, by those meant to protect us, even by our own friends and family, and most of all, by our self-appointed “saviors”.

We still feel the pain and hopelessness of knowing that none of his victims want to contact the police because reporting a violent crime to the police may be either futile, or worse, bring upon US more punishment than he would ever receive.

And we remember and share the pain of our elected families of other sex workers, every time one of us is kicked out of an apartment, a job, a country or denied any other right or service, simply because we refuse to choose a less preferable life, or even death, over having payment being one of our conditions for sexual consent.

Every time an attempt to “save” us leaves us without any income, every time one of us are kicked out on the street without anything in order to “protect” us from ourselves, every time we are harassed by the police when we are trying to report a sexual assault, every time our “saviors” feel more like religious crusaders, we all feel the pain.

It is also the day we remind each other why those of us that want another source of income are put in this position, how laws allegedly meant to save us, are built on untrue prejudices and leaves us more exposed to violence. How social differences and unrealistic demands create barricades in front of our choice of career and life, how this makes us dependent on this income, however temporary or permanent it might be. And how this income is treated like the honor laws from the 1600s is still in effect and enforced.

Finally, it is the day we grow and become better human beings, because we listen to the stories, we learn from the past, we teach each other how to defeat and prevent violence and hate. We learn what works and what harms more than it helps. Let us together end this crusade against sex workers, it is about damn time that we who have fought for sexual freedom through the ages, finally get to enjoy that freedom ourselves, without fearing for our safety.

Before we move on, I would like to call on one minute of silence, to remember and honor our fallen family members, Trine, Gry, Anita, Rebekka, Galina, Eva-Marree, Vanessa and all other murdered sex workers.

In addtion to Lilith, speeches by: