My mother, the marriage migrant 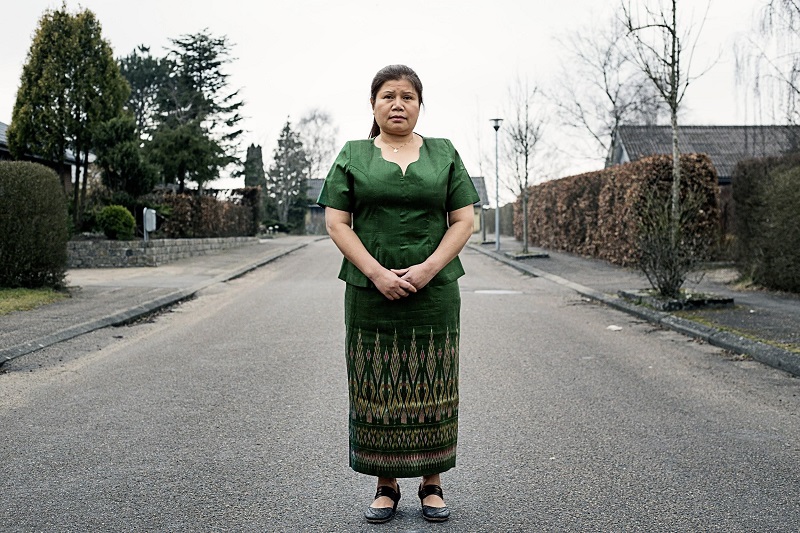 People looked down on my mother because she used marriage to create a better life for us overseas. What's so shameful about that?

I remember it clearly. In the winter of 2008 I was sitting on my bed with my legs crossed, channel surfing to distract myself from the loneliness that comes with being a 15-year-old thousands of miles apart from home and family.

I remember when my eyes met those of the woman on the screen. The woman staring at me, she looked like my mother. She looked like the woman that I had grown up with in Isaan, the poorest region of Thailand. Her story was the story of my mother and her friends. This woman had come to Denmark to marry a white man.

My stomach hurt. The kind of pain that spreads from your stomach to the rest of your body when you know something bad is waiting around the corner. I thought there was no reason to continue watching because I knew how it would play out. The woman would be portrayed as submissive, weak and clueless. Someone who came from a poor country and, not knowing any better, married a white loser who wanted a young, subservient Thai wife. A live-in maid. I had heard and seen that story play out countless times in the media since arriving in Denmark as a five-year-old. Not once had the women and men been portrayed with dignity, with curiosity, and respect. Not once had they come close to representing my family constellation or my mother’s migration story.

My mother came to Denmark as a marriage migrant. She received a tourist visa in Thailand, came to Denmark, and put an ad in the local newspaper with the headline ‘Thai Woman Seeking’. The man who became my stepfather answered. They got married, and shortly thereafter I came to Denmark to live with them.

Their love bloomed over time. It was a form of love that, in all my years in Denmark, I have only seen interpreted as a wrong form of love. People have always looked down on my mom or pitied her. They have condemned my stepfather. And they have felt misplaced sympathy for me.

There is a duality to living in the western world as a reunited migrant child, because us migrant children grow up eventually. We are a whole generation of children who obtained family reunification with our mothers in the 90’s and 00’s. We are now adults, living our own lives in Denmark far away from a homeland that feels more distant every single day.

I know that I am, in many ways, very lucky. I have had all kinds of opportunities to shape my own life because my mother took the decision to travel to Denmark and find a husband. I am grateful for everything my mother has sacrificed for me. But being the ‘chosen one’ – the one who moved away from poverty for a chance in a more prosperous country – has still had its price.

I miss Thailand and my grandparents every day. Some days the longing is physical. My chest hurts and it feels like I am trapped under water, slowly drowning. I miss my grandparents even when I am back home in the village, because my mother tongue has slowly eroded after all these years in the west. I find myself reaching for specific words and sentences, as if they were items stored on the top shelf of a supermarket, painfully close yet out of reach.

I do not know what to do with such longing. My mother traded her life and family for me to have a better future, and doesn’t fully understand why I would long for the life she left behind. As a child of a migrant you are in a form of limbo, caught between gratitude and longing, between your family’s expectation of material support and your own westernised dreams and hopes.

My mother’s generation of women had one goal: to migrate and create a better life for their children. How do you explain to them that you, as a young adult in the west, have other hopes and dreams without sounding spoiled and ignorant of everything they have done for you?

My western friends do not understand how difficult it is to have life choices and consequences taken on your behalf. Taken for the best of reasons, in hope, love, and a selfless attempt to give one’s children better opportunities than those they had themselves. But you are still left with a daily, all-encompassing longing.

Migration and motherhood are intertwined for the women in Isaan. I cannot stop thinking of how much collective heartbreak we’ve suffered in the search for a better life. How it was never possible for mothers to raise their own children because they had to leave to search for jobs.

My mother worked at various factories in the outskirts of Bangkok before going to Denmark, so my grandparents cared for me even as a baby. For a long time I thought they were my parents, I saw my mother so seldom. When she came for me after marrying a Danish man I could no longer recognise her. I screamed and cried out for my grandparents when she dragged me through Don Mueang, the old international airport in Bangkok. I did not understand that she was my mother.

If my mother had not migrated from Thailand, I would probably still be in Isaan today. I would have two or three children and work in my family’s rice paddies, at a factory, or have some other kind of low paying job. Maybe I would have to migrate to Bangkok to work an unskilled job at a factory, leaving my children in the care of their grandparents in those months where there is no work to be done in the fields. Maybe I would have to work in the sex industry in Pattaya and send home money to my children and my mother, because sex work is the field where you earn the most as an unskilled female labourer.

## Under the public eye

When I was a child I was ashamed of the way we had come to Denmark. In the part of Denmark where I grew up, I overheard someone call my mother the ‘mail order wife’. I was the mail order wife’s daughter. I began looking at myself from the outside, just like a stranger would. With pity and repulsion. When I was a teenager my mother asked me to help a Thai aunt with a dating site so she too could get a Danish husband. I asked my mother if she did not have any respect for herself. She asked why I did not want to help my aunt get a better life in response.

When you grow up as the child of a marriage migrant from Southeast Asia, you quickly find out that there is a hierarchy within migration – and hierarchies between people. It is seen as more dignified to migrate for work than marriage. Denunciation and condemnation come from other minorities, including other Asians. I’ve seen women who are supposed to be allies, women who know what it’s like to experience racist and sexist prejudice, boast that they did not migrate that way. They married a westerner out of pure, ‘real’ love and not because they saw marriage as a migration tool. I’ve heard other Thai women emphasise that they are not one of ‘those’ women from Isaan, and that they certainly did not work at a go-go bar in Pattaya – as if that was a bad thing.

Why are the women who change their lives by selling sex or by getting married scorned? Why do so many people, including migrants, see it as the lowest step of the ladder? Why do we look down on women who simply use the opportunities they have been given?

There is no right or wrong way to migrate. There are just women trying to create better lives for themselves and their children with whatever cards they have been dealt.

Migrating for marriage is, in any case, also migrating for work. Apart from the full-time job of maintaining a home, in Denmark Thai women often work physically hard jobs in the service sector or as cleaners to send money home to their families.

My mother has worked as a cleaner or in factories ever since arrived in Denmark in the mid 90’s. She is now a cleaning lady at Kastrup Airport. I think of her when I wake up at night and cannot fall asleep again, wondering if she is lonely on her night shift or if her body can no longer handle the demands of the job. But most of all I think of how heart-breaking it feels when she comes over for a visit, nervously asking if I am ashamed of her, ashamed of being seen with her because she is wearing a uniform that screams to the world that she is a cleaning lady.

My mother has lifted our entire family out of poverty with the remittances she has sent home to our village. She is one of the strongest women I know. Yet, she asks me if I am ashamed of her line of work.

## Caring for the family, generation to generation

The women in my mother’s generation of marriage migrants have now reached their 50s and 60s. Their jobs have taken a toll on their bodies. I do not know what will happen to the prosperity my mother has created in Thailand when she can no longer work. I do not know if it will become my duty to be a transnational provider for an entire family in Thailand. I do not know if that responsibility will eventually pass to my daughter.

I have become a mother myself. I gave birth to my daughter last August. She will grow up with both her father and her mother. Neither of her parents need to travel far away to make money.

I understand my mother in another way now. My mother migrated so I would not have to. My mother left me with her parents so I would not have to leave my daughter with my parents. My daughter is a baby and my partner and I are young. Right now, we are protected by our young age, but that protection has an expiration date. I wonder how people will look at my daughter and her father when she is 15 and he is 45? Will they ask her if she is her father's wife, just like a person asked me and my stepfather when I was 12 years old?

Apart from my daughter my mother is my only biological family in Denmark, and I am afraid that her longing for Thailand will one day grow too big and she will return home. Migrants always talk about ‘The Day’ – the day when they return home. My mother has talked about it since I arrived in Denmark. From the age of five, I have heard my mother talk about The Day and how much she has been looking forward to returning home once I am old enough to take care of myself. I do not know if it will ever come for my mother, but I do wonder if ‘The Day’ will ever come for me. Sometimes the longing tears me apart, but in my heart of hearts I know I will never feel completely at home in Thailand.

Aphinya Jatuparisakul is a visual artist, photographer and writer. She was born in Isaan, Northeastern Thailand, lives in Copenhagen, Denmark.

Read the article in Thai