In Conversation With: Red Umbrella Sweden 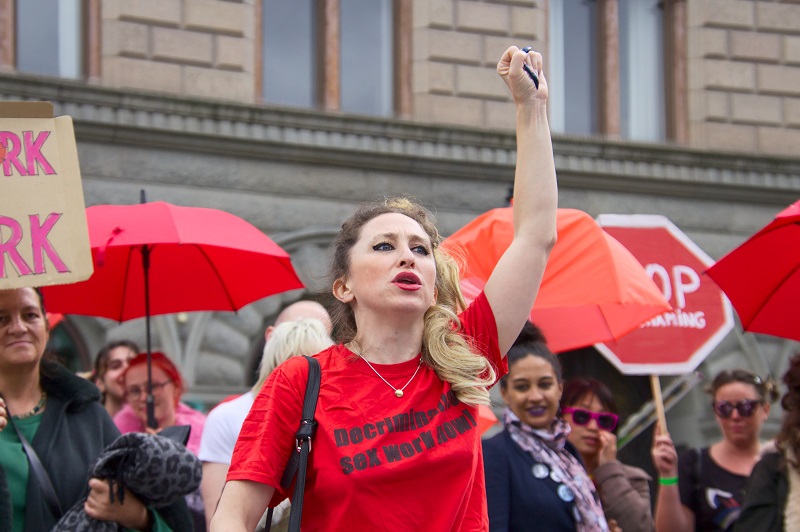 On 31 May, the Swedish Parliament is set to vote on a proposal that includes ramping up penalties for the clients of sex workers from a fine to a prison sentence.

ESWA Communications Officer Marin Scarlett sat down with members of Red Umbrella Sweden, Julian, Kira and Ruby, to discuss what this legal reform will mean for sex workers in Sweden, and what the community can do to support them.

Marin: Thank you all so much for discussing this with me. So, this proposal on sexual abuse being put to a vote at the end of May. Can you outline the contents of the proposal?

Julian: It’s a series of legal reforms by the government that will be voted on by the parliament of Sweden. The title of this proposal translates as: “Sharpened View of Rape and Other Sexual Violations”. It is mostly about increasing the protection of children and adults who are exposed to sexual abuse. Out of the blue, it also includes raising of the minimum punishment for purchase of consensual sexual services from a fine to a prison sentence.

Marin: I just need to repeat that. A prison sentence for paying for consensual sexual services?

Marin: It sounds like the proposal is overwhelmingly about something different, but then something about consensual sex work has been tacked on?

Julian: Exactly, it doesn’t fit with most of the proposal. We want to make it clear that we actually support the overwhelming majority of initiatives included here. In fact, the only change we oppose is this increase in penalties for clients.

Marin: I have a feeling I know the answer, but I’ll ask this anyway. Were any sex worker rights organisations consulted when this proposal was being drawn up?

Julian: No. We took the initiative and independently sent our own input to the government. We explained that this change is going to worsen what is an already extremely harmful environment for our community. We asked that they acknowledge the research showing that criminalisation of sex workers' clients contributes to increased stigma, violence, less access to justice and ultimately less protection against sexual abuse. We deserve to be consulted when they’re putting together laws that will have a detrimental effect on our lives.

Marin: If the proposal passes, what would this mean for sex workers in Sweden?

Kira: My biggest fear is that it’s going to be more dangerous for us. Clients will be more scared, so they want to meet in the middle of nowhere, which for obvious reasons is incredibly risky.

Ruby: That’s the main worry for me too. It will force sex workers into more dangerous situations where we’ll have to take take more dangerous clients and compromise more – primarily with our own safety. The typical Swedish client is really scared to get jail time, so they’ll not want to provide verification.

Kira: And prison means their names will be associated with this crime and available on public record. The fine was more anonymous, names weren’t released. So this is a lot more frightening for clients.

Ruby: Right. So this means we’ll have to go into jobs blind. And that will open up more for dangerous people to try to book us, or exploitative people trying to take advantage and get things for free. That will also have a very negative impact on our financial situations, which of course also makes us vulnerable.

Marin: This sounds incredibly frightening to be faced with.

Ruby: Absolutely, I’m scared. And I’m frustrated too at being targeted and ignored, having this agenda pushed that we’re victims and we don’t know what we’re doing. I’ve worked in other jobs that I’ve hated but this job is a perfect fit for me, for my mentality and my lifestyle, and I know a lot of people feel the same.

Marin: This is a job that suits your needs.

Ruby: Yeah, it suits me very well. I absolutely get sex work isn't for everyone! But sitting in an office eight hours a day, five days a week isn't for everyone either. And it feels like the government and most people have only one way of being that is acceptable and just want this to go away. But this will never go away. And if you truly care about us, and our wellbeing, you will fight to make our situation as good as possible. And for those that don’t want to be doing this, who actually would rather be in an office, help them do that! I feel like if this law passes I’m going to have to leave the country to continue to support myself properly. This is a very scary law and an incredible uphill battle.

Julian: It’s also so scary to think, what is the next step? Are sex workers also going to be getting fines and then later a prison sentence? Where is this heading?

Marin: Do you think the average Swedish person understands what the Swedish model has done to sex workers?

Ruby: I think they just think that the focus is on punishing clients. Most people seem to think that it makes us safer and feel more secure, more confident contacting the police. And once you explain the complexities of the Swedish law, that landlords are forced to evict sex workers, and migrants are even deported, they’re either shocked or even just deny that it actually happens. Unfortunately here in Sweden migrant voices are just not heard, not considered important or credible.

Marin: We know that in countries that have adopted the Swedish model, it is the supposedly decriminalised worker who overwhelmingly continues to bear the brunt of policing. With that in mind, do you think that if this proposal passes, it will actually affect many clients?

Kira: When I was raided they published all my information even though I wasn’t identified as a criminal. I was a “witness to a crime”, officially. But they published my name, my pictures, even where I live, to punish me. I was fired from my regular job because they didn’t want someone who’d been in the media as a sex worker representing them. So they aimed to shame me out of sex work but made me completely dependent on it by getting me fired from my regular job. I think this kind of thing is only going to get more frequent with the new law change.

Julian: I don’t think the way they police will change. They’re still going to be targeting sex workers. And it’s sex workers who will feel the force of these new laws.

Ruby: They want to eliminate sex work. I mean, it doesn't take a genius to understand that if you criminalise the customers or service, of course, that's going to affect the sellers of that service. That's their agenda. But it's not popular to say that you're against sex workers, you have to pretend that you care about us and our wellbeing. So this is just a political way to try and attack us without openly doing it. Insisting that we're protecting you.

Julian: Weaponising this concept of care. Using it as a smokescreen to implement deportations, making people homeless, oppressing part of the population.

Marin: How can the sex worker community and our allies best support Red Umbrella Sweden and Swedish sex workers at this time?

Julian: Stand with us at the demonstration on 21st May! If you can’t travel to be with us, you can support us remotely. Sign ESWA's petition, send a letter of complaint to the Swedish government using our template, express your solidarity on social media, or donate to our gofundme. We don’t know if we have much chance to stop this proposal, because the government has signalled in their official documents that, no matter what upcoming studies will show, they support the law change regarding sex work.

Kira: And it’s really hard for anyone to dissent within the government. Dissenting voices are instantly silenced. There was one Green Party member, Daniel Tuka, who wrote a post on social media questioning the sex buyer law. He was immediately forced to resign.

Julian: But we still really appreciate the support, because it helps us stay vocal, to keep pushing back and stand up for sex workers, and it helps us feel that we’re not alone in this.

Kira: The community really matters. When I first came across other sex workers, I started crying. I’m not a sensitive person! But it was overwhelming for me, because I’d felt so lonely for such a long time. That’s why from the start I got involved in the board because it's really important for me and to keep this community going. I hope that there are other people out there that feel better from this and that they can see other sex workers and we can help each other.

Marin: Kira, Ruby, Julian, thank you all so much for talking to me about this.

ESWA has launched a petition to gather signatures ahead of the vote to deliver to the Swedish Parliament:  PLEASE SIGN THE PETITION HERE